With 71% of our planet comprised of water, the ever-increasing issue of marine pollution is of great concern to all life – and can only be successfully addressed by action at every level – from the individual up through global coordination.

There are a staggering 5.25 trillion macro and micro pieces of plastic in our oceans, which equates to 46,000 pieces in every square mile of ocean, weighing up to 269,000 tons. Even more shocking, every day an estimated 8 million pieces of plastic make their way into our oceans.

With numbers that large, how can we even make an impact? At NAMEPA we believe, quite simply, by one action at a time. Every individual plays a critical role and through education on the devastating effects of marine pollution, individuals are increasingly making the commitment to the 5 R’s: Refuse, Reduce, Reuse, Recycle, Repurpose. To eliminate as much single-use plastic from your daily lives as possible – the less waste produced, the less waste at risk of entering our waterways.

Refuse and Reduce
By shifting habits to consistently utilize reusable water bottles, and reusable bags and containers – for everything from snack storage and lunches, to shopping bags – waste produced by humans can be further reduced by drastic amounts. Nearly one trillion single-use plastic bags are used annually on a planet with approximately 8 billion people. That’s nearly 2 million every minute. Globally, more than half a billion plastic straws are used every day and more than 16 billion disposable coffee cups are used each year. Make the minor investment in collapsible reusable straws, coffee cups, and cutlery for on-the-go reusable options. When reusable options are not available, always be sure to recycle or repurpose items.

Recycle and Repurpose
A brief review of your local recycling program’s website will act as a guide to prevent recycling contamination. Repurpose items at the end of their intended life, like using old toothbrushes for clothing stain removal and cleaning. More than 3.5 billion plastic toothbrushes are manufactured and discarded every year – that equates to more than 175 million pounds of plastic waste, that will take more than 1,000 years to decompose, being added to our planet every year. While toothbrushes are not accepted in municipal single-stream recycling programs, programs like TerraCycle have begun to address the issue of recycling plastic toothbrushes, although not at the necessary rate. A better option would be to select a bamboo toothbrush – just as effective, but will decompose in 5-10 years, or approximately 6 months if composted (just be sure to remove the nylon bristles before disposing!). 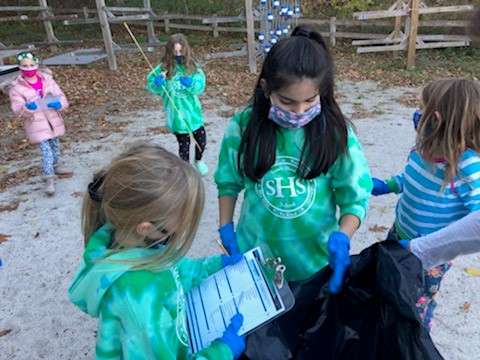 Educate and Activate
Share your knowledge with others – as individuals are educated on alternatives and commit to being part of the solution, the reductions add up quickly. With nearly 8 billion people on the planet, if every individual commits to even a single change in refusing single-use items, and choosing to reuse, thereby reducing their own individual waste, we could significantly slow the hemorrhage of plastic and waste that is flowing into our waterways, while simultaneously working to remedy the existing damage. Always dispose of cigarette butts properly and never throw them on the ground, where they are washed into storm drains and end up in the ocean. Cigarette butts are the most common type of beach litter, are often mistaken for food and eaten by marine animals making them sick, can take 25 years to break down, and negatively impacts global water quality. Not to mention that no one wants to spend time at a beach covered in cigarette butts! When you see litter, make the effort to pick it up (if you drive, keep a trash bag and reusable rubber gloves in your car to keep it sanitary!), and better yet, organize local groups for area clean-ups. Litter along roadways and in parks, as well as along shorelines, frequently ends up waterways, and by organizing an afternoon clean-up, a tremendous impact can be made in just a few hours. Sports teams, Scout Groups, and clubs are all easy places to start when organizing a local clean-up. It builds relationships within the community, while all working toward the common goal of a cleaner planet for everyone. By leading the way and setting the example, it inspires action in others. 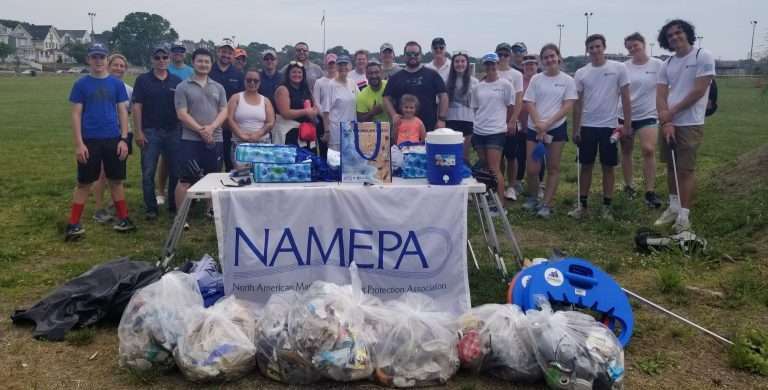 While NAMEPA Corporate Members frequently organize maritime and beach clean-ups in their local areas, they are taking it a step further, as leaders in their industry. NAMEPA member, P Ship Systems, is reducing global plastic use by utilizing technology to repurpose ship’s evaporated water and turn it into high-quality, safe, drinking and cooking water for global fleets, eliminating the need for single-use plastic bottled water. A pioneer of environmental conservation in the maritime industry, SIEM Ship Management’s efforts to reduce harmful emissions is moving the maritime industry towards a true green future. The ACTion Group’s dedication to advising, certifying and training their customers, is paving the way for a more efficient, safer, compliant and cleaner maritime industry. In 2021, NAMEPA teamed up with member and sponsor organization, Fairfield Chemical Carriers, and the City of Norwalk, Connecticut, for World Ocean’s Day as the lead up to the United Nation’s “Decade of Ocean Science for Sustainable Development”. In the current decade, from 2021-2030, the UN will work to strengthen international involvement in oceanic scientific research and technology, closely aligning to NAMEPA’s mission. Fairfield Chemical Carriers strives to help protect the ocean and engage in sustainable work practices. By focusing cleanup efforts along the Norwalk River, an artery to the Long Island Sound and the Atlantic Ocean, the collaboration between the community, global corporate engagement, and local government, decreased the amount of waste that could travel down the river and into the ocean.

NAMEPA’s CSR/ESG Maritime Sustainability Passport
Additionally, companies within the maritime sector have the unique opportunity to join NAMEPA to Save Our Seas, and several have already obtained, or are on the path to obtaining, the coveted Maritime Sustainability Passport (MSP) Certificate and Seal, the only of its kind within the maritime industry. The MSP is independently certified by renowned global consulting company, ESGplus, and is awarded to organizations who meet the requirements encompassed in each of NAMEPA’s six Transparency Pillars in its Corporate Social Responsibility/Environmental, Social and Governance (CSR/ESG) metrics.

The societal awareness, and subsequent demands on companies to also act as stewards of our planet, in addition to the commitment from individuals, is making a difference toward achieving the Sustainable Development Goals set forth by the United Nations in 2015. These 17 goals are integrated, recognizing that action in one area will affect outcomes in others, and that development must balance social, economic and environmental sustainability. Goal #14: Life Below Water is certainly of particular interest to us at NAMEPA. The world’s oceans – their temperature, chemistry, currents and life – drive global systems that make our planet habitable for humans. There are more than three billion people on the planet that depend on marine and coastal biodiversity for their livelihoods. With 30% of the world’s fish stocks overexploited, we are below the level at which they can produce sustainable yields for human consumption. In addition, nearly 30% of the carbon dioxide produced by humans is absorbed by our oceans, which is having a devastating effect on the chemical composition of our oceans, with a 26% rise in ocean acidification since the start of the industrial revolution. As more corporations commit to reducing their carbon footprints and greenhouse gas emissions, we can slow the acidification of our seas.

Our oceans are part of our global commons, reaching everyone on the planet, either directly or indirectly and how we manage this vital resource is essential for humanity. Through action at every level, inspired by individuals, reverberating through communities, and innovatively led by corporations, we all have a role to play in achieving our global goal of ensuring the waterways that are the cradle of life on our planet, remain for generations to come.