Have you ever seen a living fossil? If you ever visited the Atlantic coast of North America, you probably have! The Atlantic or American horseshoe crab (Limulus polyphemus) is considered a living fossil due to its lineage, predating the dinosaurs 450 million years ago. These pre-historic creatures thrive in the shallow coastal waters of those found in salt marshes and bays. 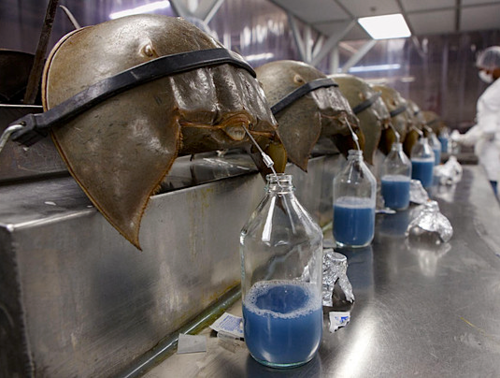 So, what does that have to do with the COVID-19 pandemic? Since the 1950s, humans have greatly benefited from the harvest of horseshoe crabs for their treasured copper-based blood or blue blood. One quart of their blue blood is valued between $14,000 and $15,000! Why so much you may wonder? Their unique blue blood contains lysate, a blood-clotting agent that prevents the spread of harmful bacteria. Having an open circulatory system, a bacterial infection presents an increased fatality risk for horseshoe crabs. Lysate supports their immune response by surrounding the bacteria and prevents it from spreading to other major tissues and organs. Because of this, as you can imagine, horseshoe crabs have a resilient and robust immune system.

Due to its quick reaction to toxic contamination, humans harvest the blue blood to test vaccinations and medical devices, most recently on COVID vaccines. The blood is tested in a lab to determine whether the developed vaccine contains a trace of the toxin. Essentially, it helps scientists determine the effectiveness of the developed vaccine.

We are not the only ones who depend on horseshoe crabs. The Red Knot, a chunky shorebird, feeds on the eggs of spawning horseshoe crabs. According to The Cornell Lab, “The reduction in food available to the knots because of the heavy harvesting of horseshoe crabs is in part responsible for a sharp decline in Red Knot populations.” The Red Knot is now listed as threatened under the federal Endangered Species Act.

The largest threat to horseshoe crabs is humans. They are threatened with harvesting, poaching, climate change, and coastal development. According to the Atlantic States Marine Fisheries Commission, Long Island Sound’s horseshoe crab population was in “poor” condition. Horseshoe crabs require flat, sandy beaches to spawn in May and June and with habitat loss through development or erosion, they are unable to reach their spawning grounds.

Next time you come across a horseshoe crab, just imagine it swimming along dinosaurs, surviving the Ice Age, thriving through the ages until now.  Also, think about how much they have given to support humans.  Then wonder if WE want to be responsible for destroying a species that has lived over 450 million years?