A mysterious disease has been killing dolphins for decades and in 2005, after Hurricane Katrina, it was finally documented in the United States. Scientists have identified and determined the cause is environmental changes in the dolphin’s marine habitat, specifically decreased salinity. Anthropogenic activity is resulting in an increase in storm frequency and intensity leading to an influx of freshwater runoff into the marine environment, reducing the salinity. Climate change and warming of surface ocean temperatures are fueling the strength and number of storms we are experiencing. 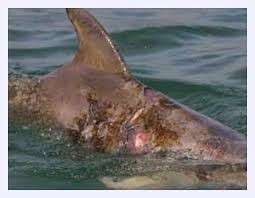 As additional data is acquired, scientists are gaining a better understanding of the source and clinical signs, along with solutions as to what can be done to stop this new Freshwater Skin Disease (FSD). Unlike Emerging Infectious Disease (EID) that can spread from animal to animal (pandemics and epidemics), this emerging disease is solely caused by prolonged exposure to unnatural levels of freshwater and is not contagious. The external skin (epidermis) of a dolphin is like that of a human. It acts as the first line of defense against outside sources of pathogens and infections while regulating the amount of water and salt allowed to pass through. Dolphins are adapted to live in saline (marine) environments and do not tolerate salinities outside their normal range for extended periods of time. When dolphins are in hypoosmotic water for long periods of time their first line of defense begins to break down. This prolonged exposure begins to damage their skin cells and if the exposure continues, they become swollen and irritated like a blister, eventually bursting. Once the skin breaks, the dolphin begins to lose essential ions and proteins resulting in more fresh water flowing into their body causing swelling and ulcers internally. This reaction is similar to third degree burns in humans. It is a slow process and that ultimately leads to organ failure.

In the United States we are just now observing this disease and the characteristic skin lesions. In Australia two mortality events were recorded after significant rain events in 2007 and 2009 where the same skin lesions were observed and are the basis for comparison to the U.S. documented cases. Scientists have recorded approximately 150 named storms in the Atlantic and Gulf of Mexico over the past decade which is more than the previous decade. As the number of severe storms continue to increase as the result of climate change, more dolphins will be at risk to developing the freshwater skin disease. In order to save these species and other species from climate-induced diseases, the global community needs to address climate change and supporting legislation.