The environment has DNA?

We have all heard by now of our own self-identifier, our own molecular fingerprint, Deoxyribonucleic acid (DNA)…the building blocks of life. But have you heard of eDNA, environmental DNA?

DNA is ubiquitous, abundant, and easily collected and identified in a laboratory. Its use in wildlife situations is fairly new but has been under the spotlight as scientist find more and more applications as the databases grow larger. DNA analysis for wildlife began making its way through population genetics and the databases that were being created for each species.   Each species has its own separate database and some subspecies do too! The larger the database the more statistically sound the results will be upon comparison.

Environmental DNA is DNA that is floating around in the environment, the water column or soil. DNA is found in all cells in the human body except our red blood cells, but this differs in other vertebrates (and some invertebrates as well) such as fish, reptiles, birds.  These species do have red blood cells that contain a nucleus with DNA. It is no wonder that cellular material such as tissue, feces, scales or cytoplasmic material is released in the environment just by the species simple being present for a short period of time.  Simply swimming through or near an area while migrating or foraging will leave little pieces of DNA behind. 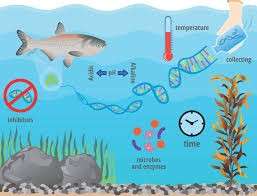 DNA that enters the environment gives a glance into the microscopic world in terms of that ecosystem’s biodiversity. Ecosystems not only consist of permanent residents, but also transient and migratory residents that may use the area for feeding or birthing. Using eDNA collected from specific sites over a period of time, scientists can

get an idea of the distributional shifts or migration patterns through a particular site. The DNA collected will also contribute to the existing databases for species, which in turn provides the high-quality reference needed when looking at invasive species or ecological invaders in an area. Larger databases and more references allow scientists to see taxonomic differences in species, subspecies and sister species. In addition, eDNA found in the water column can help us confidently detect rare or endangered species that may frequent an area providing the evidence needed for conservation management and protective legislation to be put in place for a particular species or an entire ecosystem.

Everywhere you go you leave a small, microscopic piece of you and you take some with you and as we now know, marine animals do too! So next time you are swimming in the ocean, just think you could be swimming right next to the DNA of the world’s largest mammal, the blue whale! 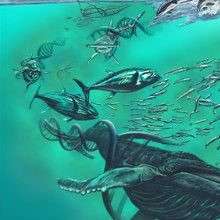 The NAMEPA team set a schedule to visit members, partners and students after a hiatus…

With 71% of our planet comprised of water, the ever-increasing issue of marine pollution is…