NAMEPA was invited to attend the Microplastics - A Path Forward to Action workshop at Draper in Cambridge, Massachusetts. 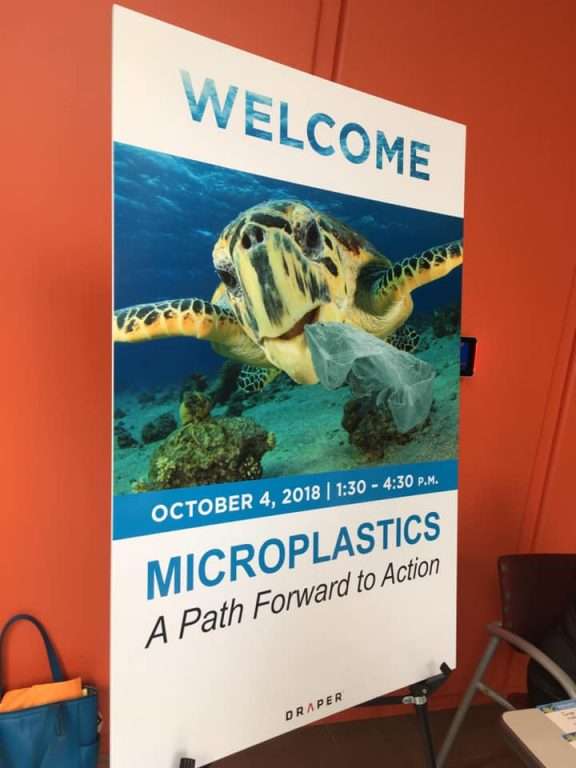 Draper, a non-profit science and engineering organization, hosted the workshop to bring together professionals in the field of plastic pollution, aquaculture, policy, advocacy, and research to discuss recent findings, measurement methods, and practical solutions.

The pervasive problems of marine debris negatively affect marine ecosystems and humans alike and the amount of plastic in the ocean is higher than ever before. According to National Geographic, there are around 5.25 trillion pieces of plastic in the ocean. Plastic has been found in the most remote areas of the ocean, and can accumulate into large trash islands such as the Great Pacific Garbage Patch, which is twice the size of Texas. When in the ocean, plastic can be ingested by animals, entangle animals, leach harmful chemicals, and more.

Microplastics require a microscope or other scientific instrument to view and are defined as under 5 mm. Plastic does not break down, it “breaks up” in sunlight, resulting in microplastics that are posing detrimental threats to ocean health.

The workshop attendees and speakers ranged from a diverse crowd of those engaged in academia, federal government, local governments, corporations, and non-profit organizations with a common focus of microplastics and conservation.

The first speaker, Anna-Marie Cook, is a marine debris researcher in the Environmental Protection Agency (EPA). She is part of the scientific team that explored Tern Island in the Northwestern Hawaiian Islands, a federally protected site that is a home to the most endangered marine mammal, the Hawaiian monk seal. Green sea turtles, endangered birds, and other critical species utilize this area’s natural resources. In recent years, the remote island has been so badly impacted by marine plastics and toxic waste that it has been designated a superfund site.

Cook introduced the topic of plastics in the ocean by indicating the current problems and why this has become such a large environmental issue. Cook indicated that 80% of marine debris comes from land-based sources, making consumers from all  geographic areas responsible for the problem.

Currently, collection rates of plastic do not equal recycling rates. Since plastic production is continually increasing and plastic is inexpensive relative to other materials, there is not a lucrative market to support plastic recycling at the rate that consumers need. Also, plastic can be defined in such a variety of ways that there is no easy way to streamline plastic recycling.

Cook continued by informing attendees on the EPA’s recent research of the physiological threats of macroplastics, which are plastics that are large enough to be visible to the naked eye. She noted that albatrosses on Tern Island were found with heavy concentrations of plastic in their stomachs, and she observed adult albatrosses feeding plastic to chicks.

There are significant toxicological impacts of plastic pollution. PCBs and other contaminants have been discovered in the digestive tract of marine animals and the blubber of marine mammals. This contamination can move up the food chain, causing increased negative impacts of bioaccumulation. This toxicity can result in illness and impaired behaviors in marine organisms.

The workshop continued with a representative from Mars Wrigley Confectionery, a large corporation that manufactures, packages, and distributes gum, chocolate, and other items. She described the issues around plastic production from a corporate standpoint and the challenges of recycling. Plastic is hard to collect and identify, has low market value, and varies in weight. Additionally, she indicates that recycling should be less confusing to the consumer with increased education and outreach programs and targeted marketing. Mars is committed to sustainability by working to create more eco-friendly packaging and marketing campaigns.

The next speaker was Eric DesRogers, Senior Manager of the Ocean Conservancy’s Trash Free Seas Program. He described how the Ocean Conservancy was tackling the issue of marine debris from a nonprofit lens. The Trash Free Seas program, including the International Coastal Cleanup and Marina Cleanup Day, which NAMEPA partners on, are public awareness campaigns to bring light to the problem of ocean trash through community cleanups and education programs. Education is the first step to create the next generation of responsible consumers and ocean stewards.

The final formal speaker was Dr. J Evan Ward, an experimental biologist and professor at the University of Connecticut specializing in how bivalves, shellfish with two shells such as oysters, clams, and mussels, are being affected by microplastics. He indicates that 800 species of marine animals have shown to be impacted by debris, but his research focuses on oysters and mussels. Bivalves are keystone species in marine food webs because they are at the bottom of the food chain, provide habitat, and most importantly improve water quality as they filter feed and break down pollutants.

Dr. Ward explained that microplastics research is difficult because there are low standardization methods, and since there are so many types of plastics there are some experiments that are poorly designed for what the hypothesis is investigating.

After the formal speakers finished presentations, the workshop continued with a roundtable discussion and more detailed findings from the EPA and Draper’s expedition to Tern Island to research microplastics.

As an organization, NAMEPA has a mission to educate students, seafarers, and the public on the ocean and encourage others to Save Our Seas. This workshop has provided the insight to continue to teach others on the importance of ocean conservation as it pertains to marine debris, and to inform on the many types of work being done by other organizations to research, inform, and combat the problem of ocean trash. Collaborative workshops, such as Draper’s Microplastics – A Path Forward to Action, are critical to bringing minds together to battle such a large environmental issue.