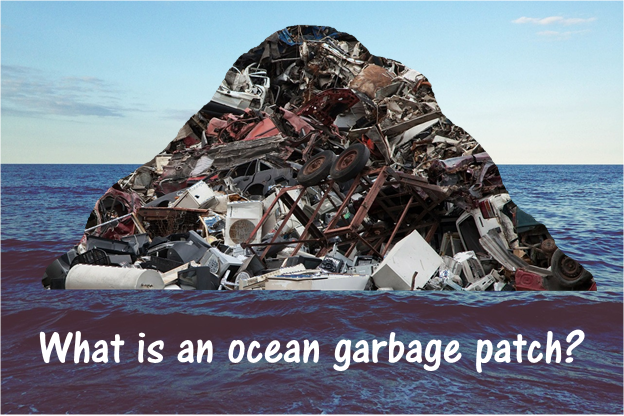 The Great Pacific Garbage Patch (more formally, the Eastern Pacific garbage patch) is not a swirling, mountainous landfill in the middle of the ocean; it is not a hurricane-like pile of plastic water bottles, empty cans, used fishing nets, and old appliances on the surface of the Pacific. Most garbage finds its way to the ocean eventually, through runoff and storm drains. Large pieces of garbage do in fact interfere with marine life as old plastic bags remain intact and are consumed by sea turtles or as dolphins get caught in plastic 6-pack rings. Garbage patches are not an accumulation of these horrific encounters between wildlife and trash, however, they are spiraling masses of something much more subtle and sinister.

For the most part, when we think of the oceans we think of either waves crashing into the shore or flat expanses of water occasionally interrupted by large waves. But the oceans are also dominated by currents and patterns of water circulation. These patterns of circulation create oases in otherwise barren areas of open water; the currents drive together marine life and nutrients. But with human interference, these currents are also a cause for alarm as they assist in the accumulation of garbage as well.

Gyres are centers of convergence of multiple currents in the ocean. There are five major oceanic gyres in the world, according to the National Oceanic and Atmospheric Administration, and they form when ocean currents create a circular pattern of water movement, allowing things to congregate in the middle. The most well studied and well known of these gyres is a convergence of currents in the Pacific Ocean near Hawaii. This gyre is about three times the size of the continental US.

A combination of the action of a gyre, the unpredictable impacts of El Niño, and the movements of smaller ocean currents and eddies swirling together allow for the formation of the Great Pacific Garbage Patch. Garbage patches are formed when meandering movements of ocean currents occur within the convergence zones of gyres. The important water movement in this area is able to give life in its nutrient rich waters and take it away with its high concentrations of pollutants.

Why isn’t a garbage patch truly an island of massive pieces of garbage? What is this subtle and sinister mass destroying ocean communities?

Plastics take hundreds of years to biodegrade, or break down until they no longer really exist. The amount of plastic thrown out every day, even with the prevalence of recycling in many cities and cultures, is massive. Although it will not disappear altogether, plastic garbage does break down into small pieces referred to as microplastics. Microplastics are extremely dangerous because they are small enough to invade and destroy all types of organisms, big and small. Plants, protists, and other microbes use microplastics as substrate on which to grow. Microplastics leech into the bloodstreams of fish and marine mammals. Sea turtles and sea birds consume microplastics accidentally as they feed. Large pieces of marine debris are often sources of entanglement or accidental consumption, but microplastics are impossible to avoid. Accidental consumption of microplastics can occur in every gulp an animal takes; microplastics have become ubiquitous and lethal, especially as they accumulate in nutrient-rich areas of intense biodiversity.

Marine debris is everywhere; it is carried great lengths across oceans, accumulating and spreading out with the currents and failing to completely degrade. The impacts are endless, including problems for human transportation across oceans and killing marine animals through their consumption of marine debris or entanglement in it. The concept of a garbage patch does a good job of generating the right kind of imagery in order to instill fear and concern about the marine environment. Huge islands of trash effectively give the right impression of how much marine debris humans create, though the reality is not quite what most people think it is.

In reality, plastics and other pollutants break down and swirl together in areas with high concentrations of organisms, causing them to be taken up into the food chain, slowly invading the biological systems of all things marine and weakening, if not killing, them. Much still needs to be studied about marine debris and its interactions with patterns of ocean circulation and organism concentrations, but the basic takeaway is one of extreme danger.

What is the solution?

For now, it is prevention.  Proper disposal, recycling, reusing, and reducing human consumption of plastics and other products will keep more debris from entering the ocean.  By not adding to the problem, we give scientists the opportunity to create a solution to ‘remove’ the garbage patches and heal the oceans.  Do your part to “Save Our Seas”.

For more information about the Great Pacific Garbage Patch, view NOAA’s video below.

With 71% of our planet comprised of water, the ever-increasing issue of marine pollution is…