Coral reefs are the rain forests of the sea. Full of diversity and severely endangered, corals play a very similar role in reefs to the role of trees in rain forests. Corals provide a backbone for the most lush, colorful, and productive ecosystems on the planet.

For humans, reefs buffer shorelines, provide homes for important fisheries species, are important tourist destinations, and can provide novel medicines. According to a study done in 1997, the economic worth of coral reefs adds up to approximately $375 billion each year, even though reefs only cover 1% of the earth’s surface. Yet all of this value is at risk under the influence of climate change. 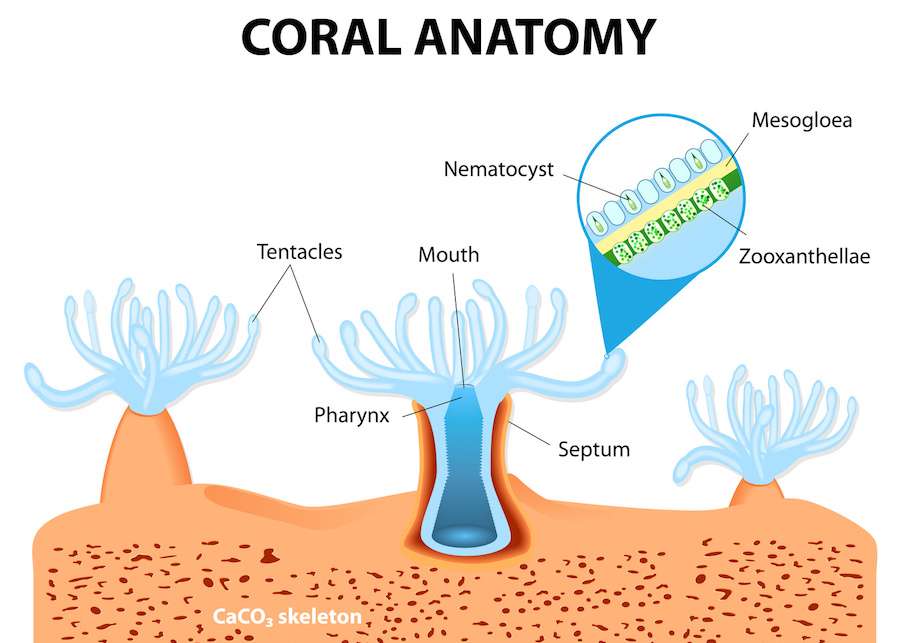 Reefs are colonies of coral polyps, an animal most closely related to jellyfish. They are part of a family called cnidarians (with a silent c), all of which have nematocysts, or stinging cells. Together, these polyps with calcified outer shells aggregate and build off of one another to create vast fields of coral, or coral reefs.

Within the calcified outer shell of an individual coral polyp lives tiny symbiotic algae called zooxanthellae (pronounced zoh-zan-thel-ee) which allow corals to both consume organic matter, which is captured using their stinging cells, and create their own organic matter, like plants do, using the algae.

The incredibly bright and diverse colors that corals are known for are actually created by the algae. Coral itself is the white of its calcified skeleton; without its symbiotic algae, the characteristic colors of coral disappear.

Unfortunately, this incredible symbiosis is also the root of coral’s vulnerability in the age of human influence. Today, corals are in danger because of a phenomenon known as “coral bleaching,” which is caused by climate change and ocean acidification. If you’re not sure what these terms mean, take a few minutes and go back to my last article for a quick lesson on the basics of anthropogenic climate change and its vast implications. As humans continually release carbon dioxide into the atmosphere as a side effect of almost all human activity, “global weirding” occurs.

In the oceans, global weirding entails rising temperatures, increased CO2 concentrations, weird weather events, and rerouting of important currents. As the physical characteristics of the oceans continue to rapidly change, corals undergo stress which causes them to expel their symbiotic algae. Corals do so in an attempt to save themselves from further stress, which is caused by the reaction of their zooxanthellae to changes in water chemistry.

Expulsion of the algae harms the coral, as they have evolved to be dependent on the zooxanthellae for food. Although some species of coral catch food themselves, all coral has an obligate symbiosis with zooxanthellae, meaning it can’t survive completely without it. This leads to the loss of the characteristic vibrant colors of coral, leaving white, skeletal branches. Fields of these bleached corals now exist underwater, terrifyingly bare, and without any other organisms because the other animals cannot survive without the coral foundation of the reef.

But this does not mean we should give up on coral reefs. In October, outcries rose up from scientists after an article was published in Outside Magazine claiming to be an obituary of the Great Barrier Reef. The article claims that climate change and ocean acidification have caused a terminal illness in the Great Barrier Reef.

If you take one thing away from my discussion of global weirding, or climate change, and its impacts on coral reefs, please let it be this: the Great Barrier Reef is not dead. And if conservationists have anything to say about it, it will never die. 7% of the reefs that make up the sprawling Great Barrier Reef have escaped bleaching; a tiny fraction of this once incredible ecosystem survives, dying, but not dead yet. Furthermore, bleaching doesn’t always mean death for a coral polyp. Given time to recover and given relief from ocean acidification, rising temperatures, or whatever stressful incident caused the bleaching event, corals can recover and acquire new symbiotic algae, allowing them to regain their health and survive.

Much of the damage to the Great Barrier Reef is permanent. Humans have aided in the destruction of the ecosystem, but there is still hope that it can recover its resiliency and remain an important ocean home. The harm in hyperbolizing the threat to coral reefs lies in the belief that it is too late to do anything to save our oceans.

Corals are incredibly endangered and they need our help; the coral catastrophe is not yet a lost cause, though it is a very serious one. In writing about natural disasters, journalist Kathryn Schulz wrote that we must use fear “to channel emotion into action. To achieve that, however, you need to navigate between the twin obstacles of panic (which makes you do all the wrong things) and fatalism (which makes you do nothing).”

Yet frustration and fear in response to the death of an important ecosystem is also a powerful motivating force. You can channel all of this energy into change. Take this knowledge about the vast and mysterious marine world, no matter how distant it may be from you individually, and allow it to guide you on a path between fatalism and panic, a path toward progress.